At the home of Rotherham United manager Matt Taylor and his wife Sarah there is a lighthearted debate going on about the sporting future of five-month-old baby Darragh and how he might pledge his international allegiance.

“We’ve said he can play rugby for Ireland, football for England and cricket for England,” says Taylor, a cricketer of some repute before football took over, but Sarah, who is originally from Sligo, has other ideas.

There is the chance that their baby son might choose other hobbies entirely but so far he has been well immersed in the world of football. First, at the hospital when he was born as Taylor watched Exeter City’s EFL Cup defeat to Gillingham on the iFollow stream while staying on the neonatal ward. 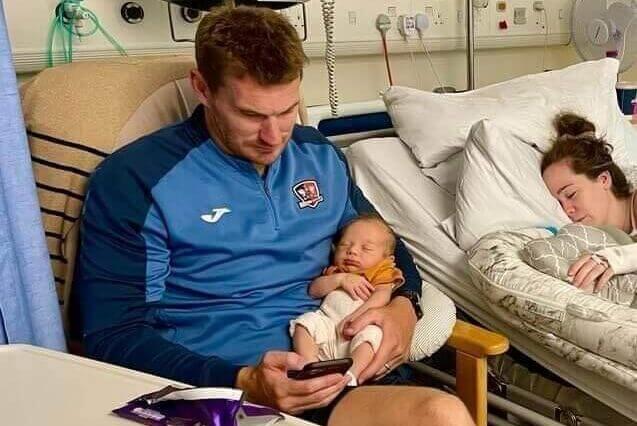 Then when Taylor walked into the centre circle at St James Park and thanked fans of his former club for the final time. And since then Sarah and Darragh have watched on from the family area at the New York Stadium, home of the family’s new club, Rotherham.

To say it has been a busy few months for the family, now settled in a cottage overlooking the Pennines, would be an understatement. Managerial moves happen fast and for the Taylors it was no different — between Rotherham’s approach on the Wednesday of his final week as Exeter manager in October to the clubs reaching an agreement took just four days and came just weeks after Sarah and Darragh had spent time in hospital.

“If it was, like, you had a four-week notice period to get ready and go, then it would be great but when it’s three days… We were waiting around until everything properly came through and then it was, like, bang,” Sarah says of the move which saw Matt make the jump from managing in League One to the Championship.

“I had known this was coming about but Matt said after the game (his last in charge of Exeter) he would properly make up his mind. We’d discussed that if it was the right thing for Matt’s career that we would go but it wasn’t until that game and he walked into the middle of the pitch and I knew then that we’d be going. You could just tell, it was a very emotional day.”

While Matt set off from Devon early to get a head start in Yorkshire, Sarah “packed up the house, the dog, the baby all in and off we went” a few days later, calling on friends back in Exeter to help with any extra jobs.

At times management and becoming a new parent has been a balancing act of watching match clips during Darragh’s night feed or long drives home after away games to ensure the family spend quality time together — which has taken on new significance since leaving their support network in Devon. 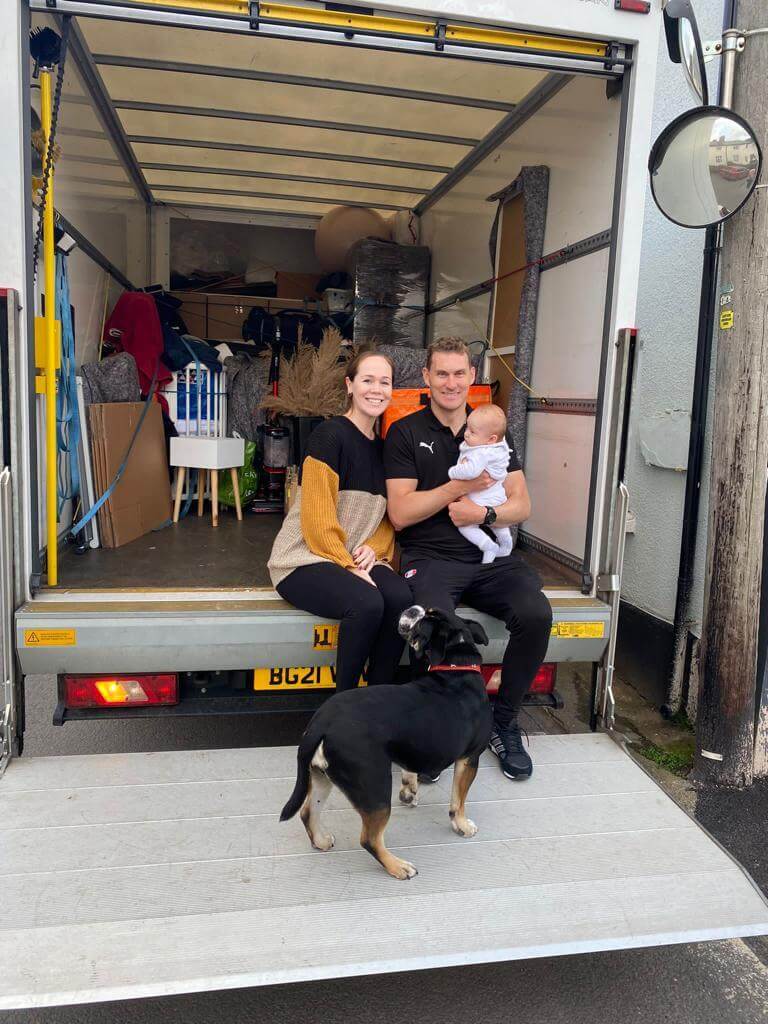 At first, the family lived in a hotel before moving into an Airbnb apartment in Sheffield while they found somewhere more permanent to rent. Taylor admits that had the job offer from Rotherham come “literally a week earlier, I don’t think I’d have taken the job” due to complications when Darragh was born.

“I didn’t realise because it was my first baby but my mum was over and we were at an Exeter game when I went into labour,” Sarah says. “I was thinking, ‘ow, ow’ and Mum asked if I was OK and this was while the game was going on. By the time Matt came into the boardroom after I said we’d better go because I was getting some cramps and that was it, that was the start of Darragh coming.

“The first week he was in the neonatal unit and we got out on the Sunday but on the Wednesday I was back in because I had sepsis. I’d had an emergency C-section so the first two weeks were really tough. It was only around the four-week mark that I started to really feel like myself so, if this opportunity came up two weeks earlier or even a week earlier, then he wouldn’t have taken it.”

“It turned into a blur, those first couple of weeks,” Matt adds, having taken a week off while at Exeter to be in hospital when Darragh was born as he was being treated for an infection in the neonatal unit.

“We knew he was coming at any point for four or so games before that. It’s the same for players, the amount of phones on the bench now for players where their partners are about to give birth. My physio Gareth had a phone in each pocket, one for me and one for my captain at the time (Matt Jay), waiting for baby news.

“When we were playing away from home in the lead-up to the due date we’d have to take cars as well as the team coach so that people could go if they needed to. It’s weird because family life is such a big thing that goes on with football still functioning.”

Pauses in the football calendar are rare but the recent break in the Championship schedule for the World Cup allowed for some quality time for the Taylors to settle in south Yorkshire before Matt took Rotherham to Cyprus for a warm-weather training camp in early December.

Leaving Devon just as they finished renovating a cottage on the coast was never going to be an easy decision, although being closer to Matt’s family in west Lancashire after so long in Devon has been a bonus.

“Obviously we got promoted last summer with Exeter and in the off-season there was a bit of talk with other teams being interested so we had a talk about it and it wasn’t a surprise in terms of the actual move of leaving Exeter,” Matt says.

“There wasn’t too much press spotlight down in Exeter so we were able to shelter ourselves and it helped that we moved ourselves out of the city to the east Devon coast. That was for no other reason than wanting a quiet life and we’ve probably done the same here by being half an hour from the stadium and the training ground.

“You have to separate yourself from the bubble. I’d never want that bubble to involve my family in any way because that’s a management burden which is mine and for no one else to worry about.”

Taylor is thankful that for this move both his and his predecessor Paul Warne’s stock was high, prompting interest from other clubs, with Warne leaving to join Derby County in September.

Though the two managers did not know each other previously, Taylor spoke to Warne before taking the Rotherham job and was inspired by his involvement in the BBC’s radio documentary series Moment of Truth, which followed Warne and Oxford United manager Karl Robinson at the end of last season.

“I had listened to the BBC podcast which was nice because I could really relate to it and the way Karl and Paul spoke about management and the burdens on the family or the pressure from the fans,” he says.

“You don’t get many things which make you feel more comfortable with your work because it’s so different from anything else in the world, football management, because it’s so intense and results-driven and you’re so judged at any single result or moment. But this was two people in a similar position in football management talking about their feelings and their job in the same way that I would do, so it was nice to hear that other people in the industry feel the same and have the same worries.” 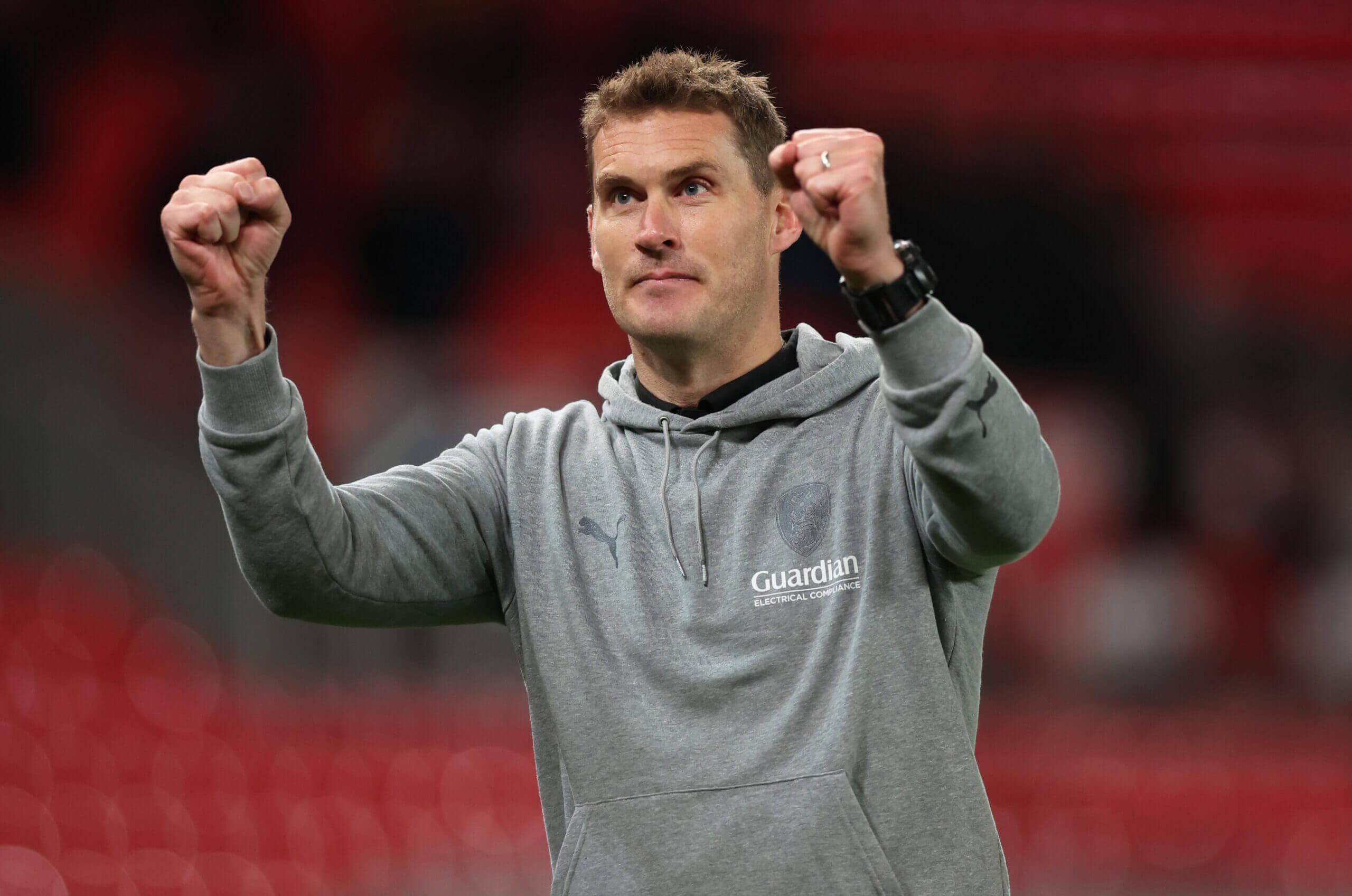 Any worries Taylor had about leaving his players at Exeter were put to bed when they surprised him at the training ground on their day off. As he went to collect his belongings before jumping in the car to head north, all of his players offered reassurance and understanding that the move was the right one. And Taylor has enjoyed the step up so far with an impressive win over Sheffield United, a first at Bramall Lane in 42 years, and crucial victories over Stoke City and Huddersfield Town since he took the job.

They have endured a tricky run recently but there are plans in January to boost the squad as they bid to stop their yo-yo existence between the Championship and League One.

“The level of the Championship in terms of the opposition is incredible,” he says. “When we talked about taking the job we spoke about ownership models because Exeter was such a one-off in terms of fans owning the club and trust members making up the board with no chairman making rash decisions. But from that point on, the next club was always going to be different and people are always going to make decisions based on success and failure.

“You forget about the admin of moving and the logistics of it and Sarah took most of that on with a six-week-old and a dog as well. Moves don’t always happen in a good way, it can be a bad way. And that was one thing because Exeter were always such a stable and loyal club for managers. I was relatively secure there but you can’t stay secure for too long in football management. So we felt, not for the risk aspect but just in terms of progression, that it was time to move. And we’ve settled in here.”

The 40-year-old had been a player, coach and manager at Exeter, which is where he met Sarah, who is a nurse in the NHS and worked in a Nightingale hospital during the COVID-19 lockdown in 2020.

That period of stability — as coach of the club’s under-23s before four years as manager — is relatively unusual in football but the Taylors know Exeter was a rare case.

“For me with Matt’s job, some people wouldn’t be able to cope with it especially if they had grown up, lived and done everything in one area with lots of support around,” Sarah says as she prepares to transfer from her nursing job in Exeter to a hospital in south Yorkshire to start work again once her maternity leave comes to an end.

“I can go to any hospital around the country, so hopefully that was a selling point when I met Matt — it’s probably why he married me! When it was rumoured in the press about Matt and Rotherham my managers were asking what was happening and I was saying ‘ooh, ummm…’

“My job before was office-based, ward-based and community-based and it was nice hours so no nights or weekends. It was a nice little number I had there but, sure enough, here I am. I came over to the UK when I was 18 and I have always jumped about, whether that’s renting a house or whatever. It’s not a massive deal. It’s all good fun and you take it in your stride. I’ve got a lot of friends where this world is mental to them and they’re saying, ‘Sarah it’s crazy, are you OK?’ and I have to reassure them I’m fine.”

Moving in a hurry could happen again for reasons good or bad in the future, depending on the tempestuous nature of management but, for now, all focus turns to Rotherham’s Championship campaign as they look to cement their status as a second-tier side. And, after a hectic six months, the important matter of Darragh’s first Christmas in their new home.

“People say to me, ‘How have you done all this?’ but to be honest, I don’t know. The only thing that’s stressed me out about the whole move was when Darragh was ill and had to spend another night in hospital.

“We’ve always said: whatever happens we will do it together and now Darragh is part of that too.”