If you have read a few baby books or searched the Internet for parenting tips you have most likely stumbled across the mythical Unicorn Baby.

This is the baby who feeds every four hours and sleeps through the night, sits at six months, pees pure gold and poops rainbows.

Whether this baby exists or not does not matter. What matters is this: you did not get this baby. If you are looking to answer the question: “Is my baby normal?” then you are in the right place.

The Unicorn Baby is an honest and hilarious account of parenting by Occupational Therapist, Roxanne Atkinson.

Roxanne uses her professional experience as an Occupational Therapist to identify and debunk ten modern parenting myths that cause all kinds of anxiety for new parents and often leads them down the wrong parenting paths.

Myth: You need to get your baby into the perfect routine

Reality: There is no such thing as the perfect routine

Myth: You should only feed your baby every four hours

Reality: You should practice responsive feeding, not scheduled feeding

Myth: You must teach your baby to sleep through the night

Reality: There is no magic formula that will make your baby sleep through the night, no matter what you do.

Myth: Your baby grows and develops every day

Reality: Your baby will grow and develop in leaps and spurts

The book aims to help parents understand the biological reasons behind why their baby may not be behaving as they were told they would.

Acknowledging that every baby is unique, Atkinson hopes to help new parents navigate the first year, explaining the latest neuroscience in understandable, practical terms, before sharing some fascinating stories of other real-life babies.

READ | ‘A Crown for Christian’, a local story to help children understand the pandemic

Atkinson has allowed Parent24 to publish an extract from The Unicorn Baby, here’s a sneak peak at the book: 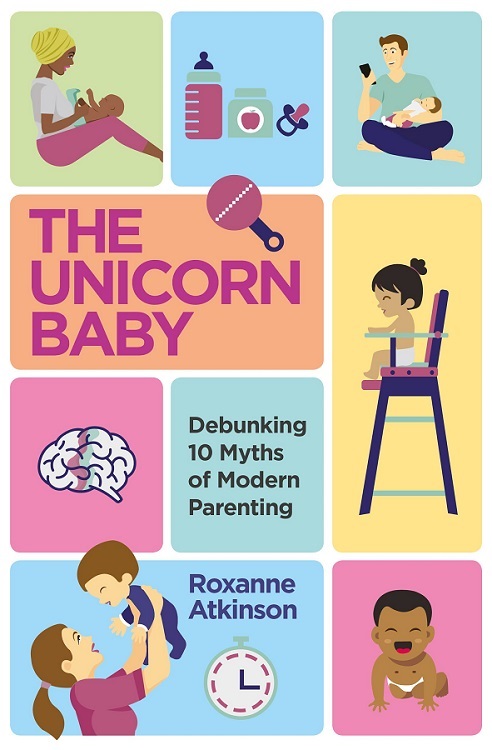 I had been practising as an occupational therapist for five years before my daughter arrived and I had many strong opinions on parenting. My daughter was not one of those seemingly perfect babies; consequently, the experience of having her humbled me – a very important step for me in becoming both a better therapist and a better mother.

She challenged much of what I thought I knew and thought I was good at. After reading many baby books and receiving a lot of bad advice, I became passionate about evidence. We are taught to be evidence-based practitioners and I became an evidence-based parent, leaning heavily on older, wiser health professionals whom I now call ‘the Silver Foxes’.

Just because a book says ‘do X’, it doesn’t mean you should. I started looking for the evidence behind the therapy techniques I used at work, as well as the parenting techniques I had been told to use at home. When my daughter was 18 months old and we had all found our parenting groove, I fell pregnant with my son.

With new, more realistic expectations, our family managed far better this time around. I had found it fascinating working as a mother and occupational therapist at Victoria Hospital in Cape Town where there was so much diversity. I loved the healthy debate and the clear impact that culture had on parenting practices. It was not an easy decision to leave my position at the hospital to focus more on my own babies while I slowly grew my own private practice.

Private practice brought with it a completely different client group and an unexpected difficulty. The families I saw were mostly professionals who had been to university and were succeeding in their careers. They were intelligent, resourceful people who could find any information or product their baby or child needed.

But some of them were suffering emotionally and were generally not thriving in their role as parents. These parents had bought the book, downloaded the app and had the sleep expert in their home. They seemed completely hung up on what I have come to identify over the years as certain myths of parenthood. They were trying desperately hard to get it right but they were burning out. South Africa is known as a world within a country because it is such a diverse place.

In my clinical practice, I witnessed that the more Western the parenting expectations, the higher the level of parental anxiety. Some parents found it hard to not be in control and struggled with the fact that they couldn’t change the way their baby was napping or feeding or refusing to go in the potty.

I often found that these parents had to rely on friends for support and did not have a larger community or family network to rely on. At times, those who came alongside them seemed to be more competitive than supportive.

There was a strong focus on independence and mastery, rather than interdependence and learning. At the hospital I would hear the Silver Foxes say, ‘Give your baby time to . . .’ but when I repeated the advice in my private work I would hear, ‘I don’t have time for this . . .’

It was during this season, raising two babies and building a business, that I had a conversation with my big sister who was seriously considering the prospect of raising her first child as an only child. She was still dutifully trying to get her baby, who was slightly younger than mine, to ‘sleep through the night’ and couldn’t imagine having another child. Her first pregnancy had not resulted in her dream natural birth.

Breastfeeding had not gone according to plan and her baby had needed surgery to correct some pretty impressive ocular challenges. As a toddler, her daughter was an absolute delight but had chosen to walk to the beat of her own drum, especially when it came to sleep. I kept my sister’s hope for a second child alive by promising her that her next baby could surely only be easier than her first. She deserved to birth the elusive, perfect infant, or Unicorn Baby as I will refer to it in this book. After all, she had put in some serious extra shifts raising her first, hadn’t she?

My sister did, in fact, go on to birth such a creature. But thankfully, for our relationship and all moms in her circle, she fully recognised that it had nothing to do with her parenting skills and everything to do with her son’s biology. He was simply born a Unicorn Baby.

We laughed as he would drink the textbook volume, burp himself and fall asleep on his back in his cot in only a few minutes. We cried real tears when he slept through the night and woke to smile happily in the morning.

He was sleeping through the night long before his big sister ever had. He started losing some of his shine when he decided he would wait rather a long time to crawl and then, when he did get moving, he showed very little interest in walking. He was not following what the book said any more.

As my sister started re-exploring the realm of ‘otherness’ with her second child and his gross motor development, The Unicorn Baby, my third ‘child’, was being birthed. As a practising occupational therapist it was clear to me that when it came to parenting there was no easy road.

No baby is a Unicorn Baby in every respect. And very few Unicorn Babies grow up to be Unicorn Toddlers.

Every parent hits a bump somewhere in the first year. For some this happens early on, perhaps even while they are on their journey to becoming parents. You may not have planned to become a parent at all or your plans to conceive may have not worked out as your ovulation tracker said they would. If you have fostered or adopted, then your call to say ‘your baby is ready for you’ may have taken far longer or far shorter than you had thought it would.

Even if your beginning is a breeze, the bumps could come later – perhaps in the birth plan or birth story or perhaps in your (non-) breastfeeding story. My book is for parents who want to know more about the mysterious being that is their baby. It is for the pregnant mom who is unsure of what she needs to do once her baby arrives and for the ambitious father who wants to give his child the best life possible.

The Unicorn Baby is for moms and dads who feel they are not winning at parenting, who fear they may be messing things up. If you have ever asked yourself, ‘Is parenting really supposed to be this hard?’, this book is for you.

It is also for the new mom who might find herself feeling unexpectedly lonely on maternity leave, and for seasoned grandparents who are interested to see what science says about what they have known all along.

My book also addresses the concerns of the worried well – those who have gorgeous, healthy babies but can’t seem to stop worrying: ‘Is my baby going to be okay? Is this normal?’ It is for the parent who is used to succeeding and is looking for help to become a better parent.

Share your stories and questions with us via email at [email protected] Anonymous contributions are welcome.

For a weekly wrap of our latest parenting news and advice sign up to our free Friday Parent24 newsletter.