PREGNANT Ashley James has candidly addressed her “controversial” belief that parenting is “boring” in its early stages.

The former Made in Chelsea star, 35, – who is expecting her second baby – risked the wrath of “mum shamers” as she opened up on her Instagram Stories.

Yet her fans came out in full force to support her views.

Ashley opened up on “enjoying” the company of her son Alfie Andrews, aged one, during her current holiday but revealed: “I found a lot of the baby/parenting stuff quite boring.

“I’d dread being on my own with him for long periods.

“I’d find myself just wishing I had my old life back or felt like I was having to pretend to enjoy motherhood when I really didn’t enjoy most of it.” 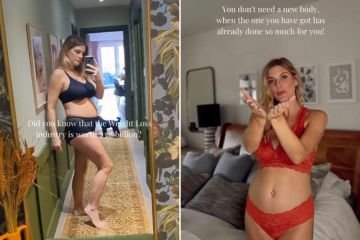 The reality star told how now her son is nearly three, she is finding parenting “less like a chore” and “more natural.”

Ashley then uploaded a series of screen grabs showing some of her fans in full agreement and praising her for speaking up.

She then continued: “Naturally there will be lots of people who love the baby phase as they just love all the baby things.”

She added: “When I felt so much regret and like I’d ruined my entire life by deciding to have a child (I was open about the fact I never wanted or envisioned my life with kids) so many people did the negative ‘just you wait’ thing.

“And that nearly sent me over the edge.”

Ashley has spoken openly about her maternity journey in the past, and confessed she was “devastated” to learn she was expecting a boy as her first child.

She said her previous bad experiences with men made her experience “gender disappointment.”

Ashley made her second sweet pregnancy announcement on her Instagram page.

She uploaded an adorable video which showed her in a pink dress and holding a baby scan image close to her tummy.

Ashley followed with images of her brandishing a positive pregnancy test while sitting in her pyjamas and sonogram footage playing out.

The DJ, who is dating Tom Andrews, wrote: “We have some news….!

“I’m excited and nervous to share in equal measure… Baby number 2 coming in 2023.

“This audio makes me cry every single time!”