BERKELEY, CALIF. — Hundreds of miles from Hollywood, in an Oklahoma town with a population pushing 1,500, it’s not unusual to spot actress Jennifer Garner clad in denim overalls and red boots caked with mud. She is a fixture on her family farm there, harvesting sweet potatoes or steering a tractor, as documented for her millions of social media followers. The land, where her mother grew up, is tended by Ms. Garner’s uncle Robert and aunt Janet and produces some of the organic fruits and vegetables sourced by her baby food company, Once Upon A Farm.

The actress joined the business as co-founder and chief brand officer four years ago, alongside longtime Annie’s leader John Foraker, who became co-founder and chief executive officer after stepping down at General Mills. Based in Berkeley, Calif., Once Upon A Farm was established two years prior by consumer products veterans Cassandra Curtis and Ari Raz as a first-of-its-kind line of fresh baby food, pasteurized with high pressure to preserve flavor and nutrition.

Today, the company markets an assortment of organic, chilled food for babies and children. Packaged in grab-and-go pouches and sold in 9,500 stores nationwide, products include fruit and vegetable blends, dairy-free smoothies and overnight oats, all formulated with no added sugar, dairy, preservatives, or artificial or genetically modified ingredients.

A mission of the company is expanding access to nutritious, organic foods across all socioeconomic levels. The team developed products that are available at zero cost to eligible families through the US Department of Agriculture Special Supplement Nutrition Program for Women, Infants and Children in select states. The company also partners with Save the Children, an organization promoting literacy, nutrition and early education, for which Ms. Garner has served as an ambassador for more than a decade.

Earlier this year, Once Upon A Farm acquired Raised Real, a direct-to-consumer brand of frozen meals that may be pureed, mashed or served as finger foods. The company plans to reintroduce the line of organic meals later this year in Target stores and on the Once Upon A Farm website.

In a recent interview, Ms. Garner and Mr. Foraker discussed the origins of and their aspirations for Once Upon A Farm as a “next-generation kid nutrition company.” 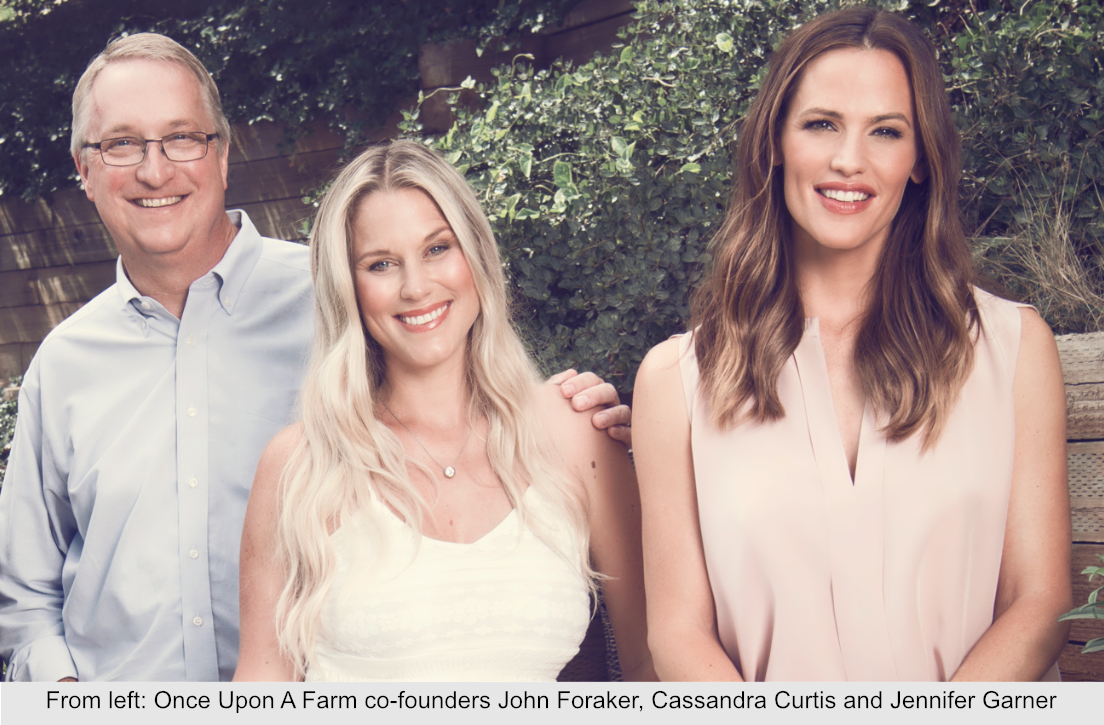 Food Entrepreneur: Jen, what drew you to the food industry?

Jennifer Garner: I grew up just one generation removed from our family farm in Locust Grove, Okla., where my mom had grown up. Farm to table was not just a concept; it was a total way of life for us.

My mom made every bite we ate; even when I was dying for a Little Debbie’s snack cake or a Pringle, it didn’t happen. Our potato chips were homemade. We had a garden. We went to farmers markets. Everything was organic. I was so, so lucky. Food has always made sense to me.

And when I found this tiny Once Upon A Farm, it just made sense to me. It solved a problem. And there are so few companies that are new that are out there that you feel like, “Oh my gosh, this would have really changed things for me as a mom.”

And actually, now that we’ve aged up into kids, it does solve a problem for me all the time because I never mind obviously when my kids reach for it. My 15-year-old probably goes through five pouches a day.

John, what inspired you to get involved with Once Upon A Farm?

John Foraker: I became one of their first big investors after I sold Annie’s to General Mills in 2014. They let me invest in different businesses as long as it wasn’t competitive. I always thought I wanted to get involved in fresh baby food because when I was running Annie’s as a public company, I got to become good friends with the folks at Freshpet, which had basically reinvented the pet food aisle with refrigerated offerings, and it just was amazing to me that no one was doing anything similar to that.

I invested, and then one day maybe a year or a year and a half later, Ari picked up the phone and said, “Jennifer Garner is interested in learning more about this company, and she would love to meet.”

We had an hour meeting in LA, and I was a half hour late for it because it was an absolute nightmare to get there. My car broke down on the way. We ended up talking for hours and mainly just bonding over the challenges all families face in getting healthier products to kids, especially families in need. And so we kind of looked at each other, hit it off and high-fived at the end of that and said, “Let’s do something together, and maybe it’s this.” And it ended up being this. So, we embarked on this crazy journey at the end of 2017… It’s been an absolute rocket since then.

Jen, how does your connection to your family farm influence product development? Will we see more limited-edition Farmer Jen pouches?

Ms. Garner: The connection really happened as we were starting to brainstorm and talk through our goals, our aspirations, how much we love the name of the company, all kinds of different things.

I said, “You know, I have a family farm, and it’s in my care. My uncle and aunt live there. He’s been a plumber for 40 years.” And the next thing you know I was calling Uncle Robert and saying, “Hey, how do you feel about becoming a biodynamic organic farmer?”

This little farm that had really only ever had some big pecan trees and a few cows back in the day and a bunch of chickens, well, suddenly it is so much fun to watch it come to life and watching my aunt and uncle out there just mending fence and hustling around.

So far, all the Farmer Jen editions and flavors have included vegetables that I’ve been there to plant, to harvest, and if you’ve seen me on a mower, you’d know that I’ve probably killed quite a bit of our profits. Not my skill set.

And so right now we have some gorgeous pumpkin squash growing for this fall… My whole family went. My niece and my nephews and my kids, parents and all of our relatives, we all planted together this year. It was so much fun. And they’re up and growing and looking great. And coming up, I think we have to see how it evolves, but our blueberry bushes are killing it out there, so you never know.

How has the pandemic affected your business?

Mr. Foraker: Our business started to accelerate about six to nine months before the pandemic started. We’ve gone on this long journey here that Jen and I laugh about and cry about sometimes of just learning, like, two steps forward, one step back. We came here and thought we were building a fresh baby food company, but really it was more of a broader kid nutrition brand.

When we went into that March-April time frame last year our business slowed down a little bit, mainly as the entire world was figuring out how to shop, so our direct-to-consumer business tripled overnight. We had a platform already, fortunately, that was there, and that got a lot bigger really quick.

The other thing is we just were really nimble and able to get consumers to be able to figure out how to find us even at their regular retailers. Things like curbside pickup and retailer direct delivery and Instacart and all that. We just really killed it with that. Our business has accelerated dramatically. 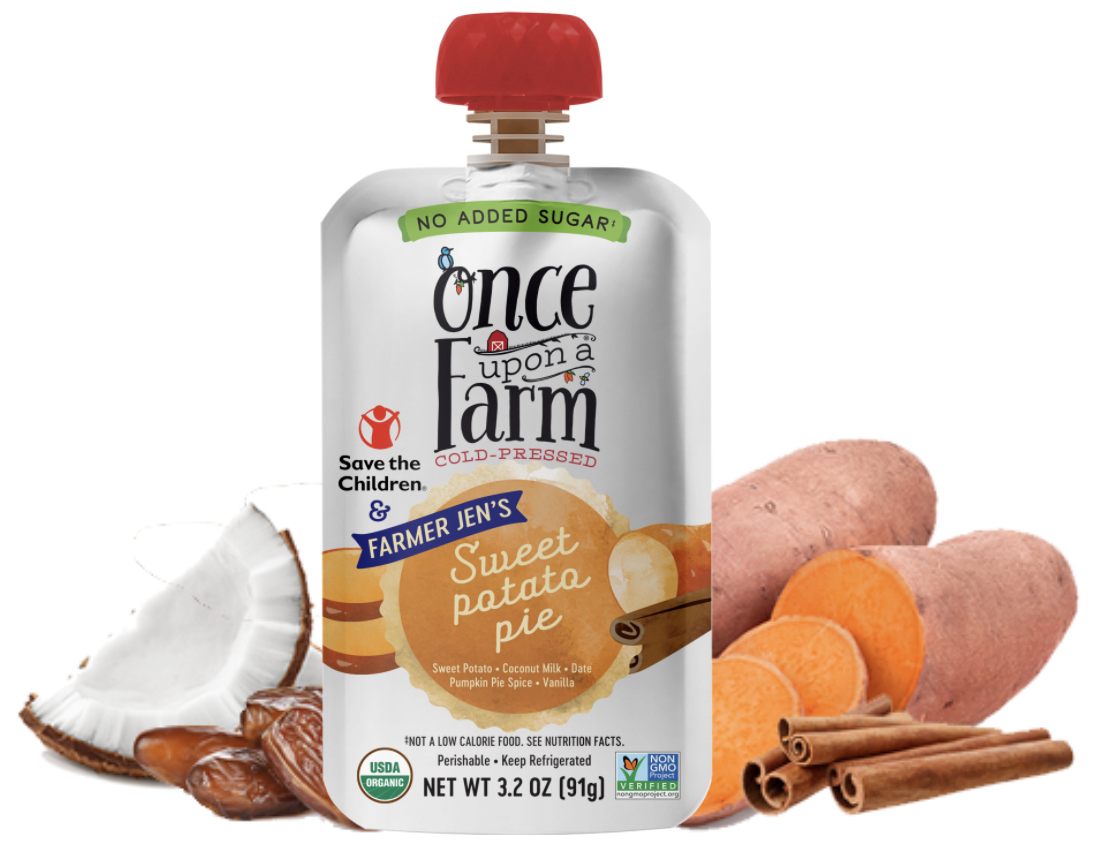 Mr. Foraker: Fortunately, for a long time prior to that, really beginning in about 2018, we were really focused on this as a potential risk in the business that we wanted to mitigate, understand and position ourselves well against.

We did things in our supply chain, like staying away from certain ingredients, sourcing from certain geographies that mitigated the natural occurrence of heavy metals in the products we’re using to make our products, and we also partnered with the Clean Label Project to get third-party testing going of all of our products.

Why did you acquire Raised Real, and what are your plans for that business?

Mr. Foraker: We have a direct-to-consumer business, and one of the most important parts of that is it gives us really close relationships with consumers so we can develop empathy around their needs and understanding what they love and dislike.

As we did that over a period of years and talked to consumers, we knew that not only they love what we stand for in fresh, but they also love the idea of us doing things in the frozen category.

Meanwhile, we’ve been watching what Raised Real was doing for more than three years and really marveling at the quality of the products. The products are just phenomenal, and they really fill a need in the marketplace for that (period) between purees and before you get onto what the parents are eating.

We followed them, we developed a relationship with the team there and a lot of respect for them. When the opportunity came along to potentially do something there, it was really just too good to pass up. Lots of times when companies go out and buy something it’s because they’re trying to cover up lack of growth in their own business… For us it was the exact opposite. Our core business is growing like crazy, and we think the size of this business in the categories we’re already in can be really significant, but we’re so excited about the opportunity to take this brand into frozen.

What is your long-term vision for the company and the opportunities moving forward?

Ms. Garner: It’s so much fun to think about moving forward. Especially because now we have moms’ trust out there, and they’re with us. They know that this whole company is fighting to make food better for their children, easier access. We’re trying to convert so much farmland to biodynamic and organic and to the healthiest practices out there.

From that, it really just feels like, gosh, how else can we elevate baby and kids’ food across refrigerated and frozen? And while we’re doing it, how much can we push our industry to really make this high-quality food more accessible, not just our brand but everyone more accessible and really think about access for kids across the country so that we’re not just feeding these kids in Connecticut and Beverly Hills this fancy food? All kids should have access to beautiful nutrition.