The right to a family life is promised to all in the Cayman Islands Constitution but that comes with no guarantee that it will be affordable.

Timisha Edwards had just lost her job when she found out she was pregnant for the first time at age 21.

After a complicated birth and with no health insurance, she started motherhood with a $28,000 medical bill.

It was a chastening initiation to the high costs of having a child in the Cayman Islands.

“I didn’t anticipate it being so expensive,” she said.

“I was lucky to have my parents to help me.”

Without their support, the challenge and expense of raising Imala, now 11, would have been insurmountable.

With their help, she coped with the costs and was able to go back to school and train to become a chef.

Now in her 30s, she owns her own business. Celebrating the recent birth of her second child, Charleigh, with her partner Aaron Haylock, she feels much better prepared.

As a two-income family, with both parents established in their careers, she believes the costs will be much more manageable.

“I knew I wanted more kids and it is nice to know that this go around we have something to fall back-on.”

Related: What does it cost to raise a child in Cayman?

Even for families with resources, Cayman is a costly place to bring up a child, says Joanna Boxall, publisher of Cayman Resident and Cayman Parent magazines and a mother-of-two.

Everything from fresh fruit – a daily requirement for growing children – to healthcare and housing cost substantially more  in Cayman than in other parts of the world.

While having a baby is rarely a financial decision, says Boxall, anyone who wants their child to have all the advantages the islands have to offer would be best advised to do their family planning with a calculator and spreadsheet in hand.

The most significant variable when it comes to the lifetime costs of having a child is education.

For Caymanians, like Edwards and Boxall, there is the option of a free public education, though both women chose to send their children to private school. They are far from a minority.

Boxall believes around half of the students at her children’s school, Cayman Prep, are Caymanian.

Parents want their children to have the best opportunity for success and a broad perception – fair or otherwise – is that the best way to get that is through a private education.

“A really big thing is where you choose to educate your child. The school inspection reports show there is a difference,” she said.

The lifetime expense of private school education for one child, before college or university is considered, runs to around $200,000-on average in Cayman.

Boxall said it was a price many parents were prepared to pay, believing it gives their children the best chance of getting the career and the salary they will ultimately need to prosper as adults in Cayman.

She recognizes that this is not a choice open to everyone.

“We are able to send our children to private school and to after school clubs and it is expensive,” she acknowledged.

“Unfortunately, there is a huge swathe of the Cayman Islands population that just won’t be able to afford to do that.”

For expats, who in most cases cannot send their children to public school, there is no option.

Jessica Wright, editor of Cayman Parent magazine and mother of two young children, said she had friends who had left the island because of the education costs.

She said, “We actually put together a spreadsheet before we had children and looked at school costs and health insurance costs in particular to see if we could afford it.”

Before school is even considered, there is the issue of childcare. For those without grandparents on island, costs can escalate quickly.

At the higher end of the wealth spectrum, many families opt to employ a domestic helper.

“For families that don’t have that extended family support network, there is not much choice about it if both parents work,” said Wright.

There are nurseries and childcare institutions that take children from as young as a few months, though even the cheaper options cost around $6,000-a-year. At the higher end, nurseries can cost up to $12,000-a-year – similar to tuition fees at a UK university. Many of them finish for the day around 3pm, so there are still additional childcare costs if both parents work traditional 9-5 jobs.

For Caymanian parents, government offers means-tested subsidies to help with some of the costs of childcare for those that qualify.

With education and childcare in general, there is a premium to pay for expats, but that is offset in a lot of cases by higher salaries.

Though Caymanians on average earn more than foreign workers, according to a national wage data survey, that doesn’t hold true for those with children.

Cayman’s immigration policy  does not allow anyone on a work permit to bring ‘dependents’ with them to the islands unless they earn more than $3,000 per month. Foreign workers must earn $500-a-month above that threshold for each dependent.

Beyond the specific costs associated with having children, there is a premium on the costs that everyone must pay.

According to a US Department of Agriculture survey, which projects the lifetime cost of raising a child to age 17 in the US as just over US $230,000, the additional cost of housing, comprises almost a third of that figure.

Food, transport, childcare and education are the next biggest areas of expenditure, according to the US survey data.

All those things cost more in Cayman. 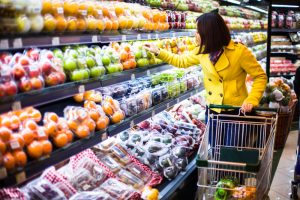 Grocery shopping is a particular challenge. Fresh fruit, one of the costliest items in island supermarkets compared with elsewhere, is a huge part of a toddlers recommended diet and a requirement for snack time at some schools.

“I feel like I am in Fosters almost every day replenishing fruit stocks,” says Wright.

Even the most prepared prospective parent must face some financial shocks. For Boxall, it was birthdays.

“When you have a primary school age child you find you are getting invited to more than 20 parties every year and the going rate is $25-a-gift.”

The cost and necessity of after-school activities is often another surprise.

Many parents find themselves spending another $200-a-month on after school clubs – significantly more for expensive hobbies like horse riding or tennis.

The YMCA Extended After School Program does, however, offer cut-price activities for children in public schools.

Though the cost of having a child can be extremely expensive, the reality is that people can and do start families without earning six-figure-salaries.

Boxall added, “People have found ways to make it work. Parents can help their children learn their letters and numbers, which will help their young children get better results in any school they go to, plus we have one of the world’s most precious and amazing recourses, the beach, right here for free in Cayman.

“Give a child a $5 bucket and spade set and they will happily entertain themselves for hours. The other thing we have is the various farmers markets which sell amazing food at very reasonable prices. You can make life with children work in Cayman without hemorrhaging money.”

Though many parents express frustration and anxiety at the costs in Cayman, those that can afford to raise children here, feel it is a good place to do so.

For Thais Saggioni, who came to Cayman from Brazil two years ago with her husband and toddler, the high costs on the island are offset by the improved salary and quality of life. Though she said the price of clothes and food in particular had been quite shocking, she said the family researched the costs before accepting a job here and arrived with their eyes open.

“Living in Cayman we have more things to be grateful for than to complain about.

“The biggest difference with Sao Paolo is safety. The kids are always playing together outside and you don’t have to worry. You can’t put a price on the peace of mind and quality of life.”