Support the independent voice of Phoenix and help keep the future of New Times free.

Maybe in simpler times, a mug that read “Have a Nice Day” or a “Hang in There, Baby” baseball cap was a cool thing to have.

But this is 2021, and we’re 12 months into a global pandemic. Which is part of why irreverent and/or obscenity-laden merch by local company Gage Huntley is selling like hotcakes.

“The minute the lockdown happened, the sales went through the roof,” says founder and owner Amanda Dale. “It’s funny, snarky stuff, and it made people laugh.”

Gage Huntley primarily sells jewelry, plus home accessories, drinkware, and baseball caps. Think tiny stud earrings in the shape of a hand with an extended middle finger; “This Alcohol Tastes Like I’m About to Tell You How I Really Feel” tumblers; and “Welcome to the Shitshow” doormats.

Dale, who moved to the Valley two years ago, founded her business in California in 2012. She’s amassed almost 125,000 followers on Instagram, where she says 97 percent of her sales come from.

“A couple of international fashion bloggers ordered from me and put the business on the map,” says Dale. “It took off from there.” 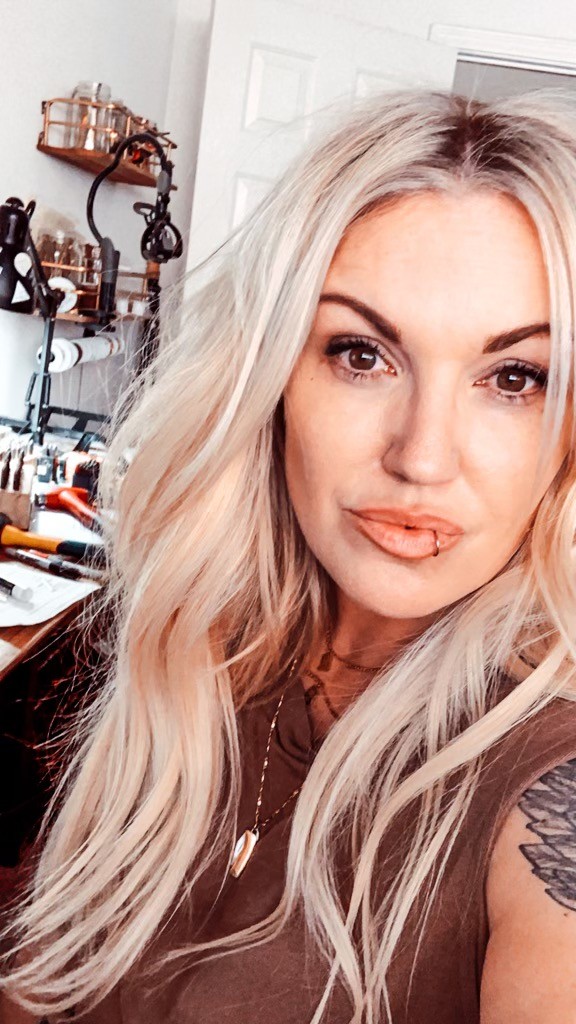 The name Gage Huntley comes from Dale’s 10-year-old son; she wanted a business name that wasn’t too girly.

“[Gage] could take over it someday,” Dale says, “but the odds are slim. He’s into video games and dirt bikes. I can’t imagine him going into the jewelry business.”

Dale’s first success came from stamped bar necklaces bearing people’s names. Sometimes, Dale says she stamps a Bible verse, or a line of a poem, in addition to her R-rated pieces.

“Every letter is individually stamped on each piece,” she says. “My whole idea with this was I didn’t want it to look like something mass-produced. That kind of takes the personalization out of it. People gravitate toward handmade items, and every item is unique.” 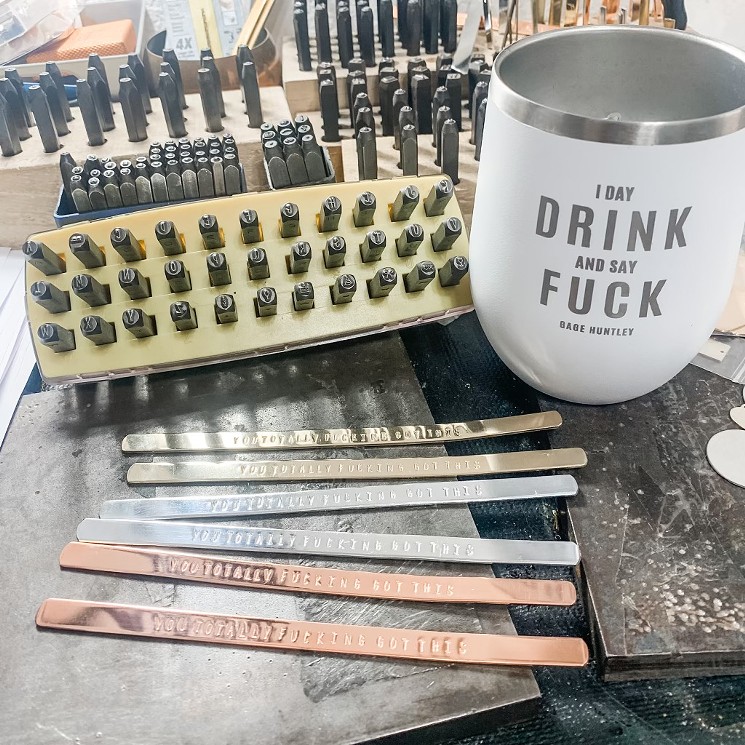 Dale’s workstation, where she stamps her witty sayings.

Dale works from her Mesa home. She’s converted one of her bedrooms into a workshop and usually works from 8 a.m. to 5 p.m. She hand-stamps jewelry almost seven days a week.

“I’m physically taking a stamp and holding it to the metal, then stamping it with a hammer,” she says. “I have smashed my fingers 9 million times.”

A one-woman show, Dale does everything. She even snaps the photos of her inventory for her site while modeling the products.

One thing Dale says she doesn’t have to do is advertise; the business is growing steadily based on word-of-mouth, and she can get 50 to 100 orders per day.

“That coffee mug that says, ‘Here We Fucking Go Again — I Mean, Good Morning’? Thousands were purchased when I did that, and it still sells every single day.”

Dale wants to share the hardships of being a parent with humor. Her products bear the sayings of a tough woman who isn’t afraid to tell it like it is.

A range of blade necklaces are beautiful new additions. A subtly tucked knife hangs from a chain and works for jewelry fans of all genders.

Dale loves her job, and likens it to doing arts and crafts all day. So where does she come up with her R-rated taglines?

“I’m totally foul-mouthed,” she says. “I was never allowed to curse as a child, so I think it just morphed into something terrible. But, hey, it sells.”

Keep Phoenix New Times Free… Since we started Phoenix New Times, it has been defined as the free, independent voice of Phoenix, and we would like to keep it that way. Offering our readers free access to incisive coverage of local news, food and culture. Producing stories on everything from political scandals to the hottest new bands, with gutsy reporting, stylish writing, and staffers who’ve won everything from the Society of Professional Journalists’ Sigma Delta Chi feature-writing award to the Casey Medal for Meritorious Journalism. But with local journalism’s existence under siege and advertising revenue setbacks having a larger impact, it is important now more than ever for us to rally support behind funding our local journalism. You can help by participating in our “I Support” membership program, allowing us to keep covering Phoenix with no paywalls.