Levine Children’s Hospital gave Tom and Deanna Williamson an angel gown when they lost their son at just 20 weeks. Now the couple is paying it forward.

CHARLOTTE, N.C. — Tom and Deanna Williamson have been married for about 10 years.

Tom Williamson said when they went to their ultrasound to find out if they were having a boy or a girl was the moment they found out that they had lost their son.

The Williamsons’ hadn’t bought clothes for the new baby, so they didn’t have an outfit to put him in.

An Angel gown is a dress that was once worn at a wedding, transformed into a gown for babies who never come home from the hospital.

“It meant a lot to us that he had an outfit,” Tom Williamson said. “It was a special outfit that had been donated from someone else’s dress.”

Not long after the passing of their son, the Williamsons’ knew they had to do something for other babies like Eli.

So while on maternity leave for Eli, Deanna Williamson said she was looking through her Facebook page and spotted an ad for “angel gowns.” She emailed them and was placed on a waiting list. It took them about six years to get off the waiting list.

Just last July Deanna Williamson said they emailed her back and said they were ready to send her dress off to a seamstress.

A group of NICU teammates donated their own wedding dresses to be transformed into beautiful infant burial dresses for children who tragically don’t make it home from the hospital.

During much grief, these angel gowns are a priceless gift to our families. pic.twitter.com/6MFAuiNkE1

“It helped us tremendously to see him and his angel gown when he was born, or whenever they took him off for his pictures,” Deanna Williamson said.  “It helped me with my grieving process and just brought me comfort knowing that he had something on besides a hospital, blanket or hospital gown or in it, it was just absolutely touching to me.” 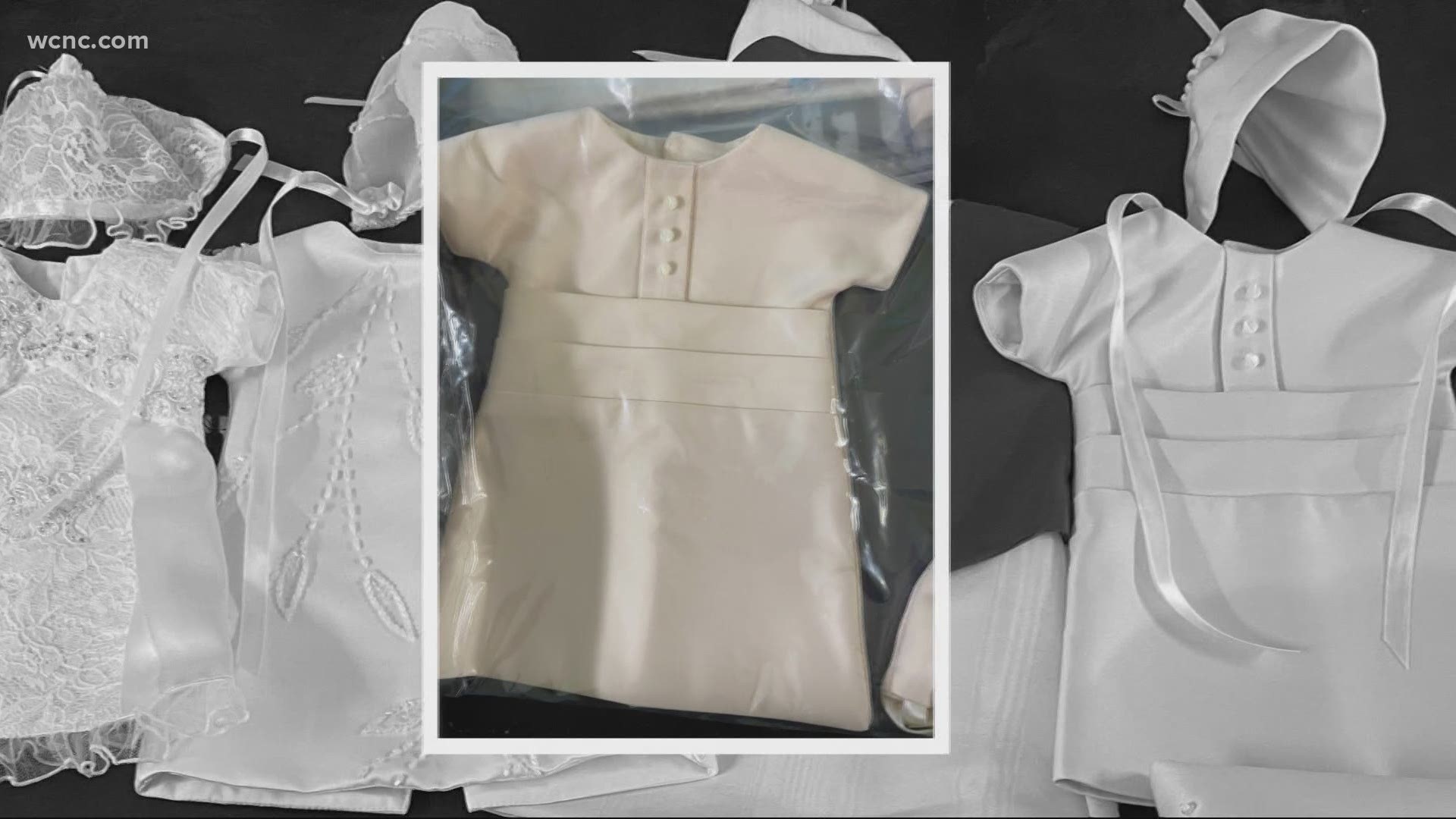 Deanna Williamson, a nurse herself, said when she was in labor with Eli, the nurses at Levine’s showed her love and compassion.

“Nurses were crying with me and loving on me,” Deanna Williamson said.

Melissa Tyo and Dr. Jessica Clarke-Pounder both oversee the Comfort Committee at Levine Children’s Hospital. Their goal is to work with families and nurses caring for babies who may not survive their NICU stay.

Clarke-Pounder, a neonatologist, said the team meets monthly and said they cover a variety of areas, but their primary goal is supporting families.

“We do things from making molds of hands and feet and making memory boxes for the parents,” Clarke-Pounder said.”

Melissa Tyo, a bedside nurse at Levine Children’s, said the hospital had been using angel gowns a little as they would trickle in from different teams.

Tyo said they identified the need to make sure all babies of all sizes were provided gowns so they started an angel gown program.

“We got a lot of support from our own staff, donating their wedding dresses,” Tyo said.

With the support of their team and the community, Tyo said they were able to expand their program to help their sister units as well.

Clarke-Pounder and Tyo said, one day, they hope to be able to provide gowns for bigger kids who can’t fit in the NICU gowns.

HEARTWARMING: @LevineChildrens gave Tom and Deanna Williamson an angel gown when they lost their son at just 20 weeks. Now the couple is paying it forward. ❤️@wcnc https://t.co/AQTt4Y4bet pic.twitter.com/9BVSGn8DOo

“Families are very emotional when they receive the gowns,” Tyo said. “We have a lot of sadness just as parents are presented with the gown and they know what it’s for.”

Clarke-Pounder added that most of the time families are not prepared to lose a child.

“So being able to provide them with something special, it really does show the amount of care that these babies receive,” Clarke-Pounder said.

Clarke-Pounder said often times the babies are baptized, so the Angel gowns act as baptism and burial gowns.

If you wish to help Levine Children’s with their Angel Gown program please visit their website and Facebook page for constant updates on the program and how you can help.