On the night before Christmas Eve, three vans filled with $3,000 in donations pulled up to Zoe’s Place in Ridgewood. There, counselors greeted “delivery elves” with open arms and accepted loads of gifts for their residents – from bed sheets and desks to strollers, gift cards and baby clothes.

When all was said and done, one of the counselors who works for Zoe’s Place – a home for young mothers with no where else to turn – broke down in tears. It’s a moment that will stay with Junius “Jeff” Carter, president of the NAACP Bergen chapter, one of the groups that spearheaded the initiative alongside Bergen County Links Inc.

“We have a group text for our board [and] one of the things I said was we’re doing God’s work, but more importantly, this is a Christmas the girls will never forget,” Carter said. “And not so much for the items that they’re getting, but they will hopefully know that they’re loved, cared for and people do care about their accomplishments and progress.”

The hefty donation to Zoe’s Place, a nonprofit program run by Children’s Aid and Family Services, and others like it are what keep the organization going. It’s also part of a shift by the NAACP chapter to focus on the basics: as 2020 highlighted inequalities in society nationwide, the chapter has spent the past several months focusing on taking care of the community in Bergen County.

For Zoe’s Place, which is run on philanthropy, the generosity of strangers will go a long way. The program provides mothers, between ages 18 and 24, with free housing, safety net services and mentoring to help them get back on their feet, said Sheila Riccardi, communications director for Children’s Aid and Family Services.

“These young women come to us really with nothing, and often they’re either pregnant or they have a baby or a little one,” Riccardi said. “When you have nothing, sheets and a bed are an enormous deal. I feel like this donation is just a really big help in getting them to get to the next step where they need to go.”

Zoe’s Place, which came under Children’s Aid and Family Services’ wing in 2014, has helped more than 80 young women and their children – and many of those women have come back to mentor others. Currently, two young women and a baby live there.

“If you think about it, I feel like often this population of young women is forgotten – and particularly at the holidays,” Riccardi said. “So the fact that somebody not only thought about them, but went out of their way to do a drive to collect all these items – it’s just beyond words. It makes you feel like people care.”

For subscribers:Meet the unsung heroes of North Jersey, quietly making our communities better for years

The donation to Zoe’s Place was substantial: a whopping $3,000 in gifts were collected. The NAACP asked those who run the program to provide what each resident needed, so the gifts were personal – one mother needed a stroller, another needed shoes for work. A bassinet was also donated.

The effort was a collective one with other organizations, including members of the Englewood Fraternal Order of Police Lodge 224 and Bergen County Links delivering the gifts to Zoe’s Place by car earlier this week.

The donation is part of a larger initiative by the NCAAP chapter to give back this holiday season — something the group has done in the past, but not to this extent, said Carter.

The chapter also donated toys to local children whose parents are incarcerated in the Bergen County Jail in Hackensack and provided $50 gift cards for those parents. The group collected gifts through an Amazon registry, where local businesses or residents could donate. There were so many donations from both efforts that the group was able to donate 40 outstanding presents and gift cards to more families in need in Englewood, Carter said.

Although giving back is not uncommon for the NAACP, the organization is more acutely focused on promoting equality. However, to have equality, one needs the basics.

“Right now, with the pandemic, there are people who have to make a choice between ‘Do I pay the rent, or do I put food on the table?’” Carter said. He continued, “If I don’t have that, the other things – the civil rights, a great education or anything else – really doesn’t matter.”

“We haven’t forgotten about being a watch guard for civil rights in Bergen County,” he added, “but we’re also pivoting and helping in other ways.” 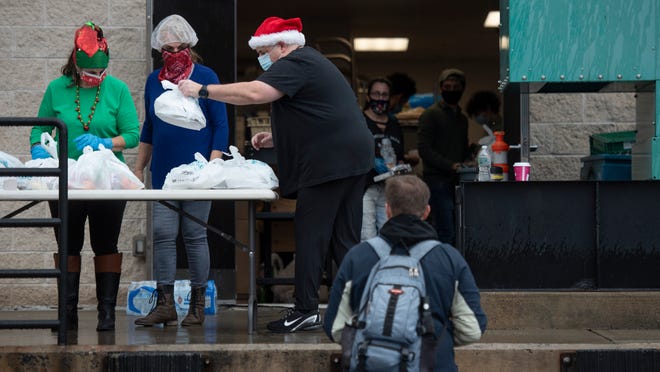