Heartening efforts by anganwadi workers and doctors from Manjri and (SGH) have saved the life of a severely malnourished child born to mentally challenged parents. Anganwadi sevikas not only ensured that the reaches hospital in time for treatment, but are still taking turns to stay with her so she is properly fed. With the state woman and child department (WCD) adopting the 1.5-year-old girl, her health has started improving and she has also gained weight. Now, the Zilla Parishad (ZP) is trying to find a way to support the child in the long term.

When Manisha Supekar was born in April 2019, she barely weighed 1.34 kg. She was hospitalised at in the special newborn unit, and discharged back to her parents after her condition stabilised. As December 2020 dawned, anganwadi workers involved in her case were shocked to get a call from Manjribased Dr Manisha Deshpande, who the child had been brought to, saying she was in critical condition. The girl was immediately rushed to on December 2 last year.

Baby Manisha’s eyes were so swollen that she could not even open them. Dr Aarti Kinikar, the paediatric head of department (HoD) at Sassoon, shared, “She was severely malnourished, had a respiratory infection, jaundice, low sugar levels and a metabolic disorder. She needed oxygen and ventilator report. Fortunately, her general test reports were normal. The child was neglected. While the mother was breastfeeding the baby, she herself was malnourished. Ideally, anganwadi workers were expected to check on whether the child has proper nourishment. We have called the parents’ relatives and explained the situation, asking for help. Primary feeding will help improve the baby’s condition further.” 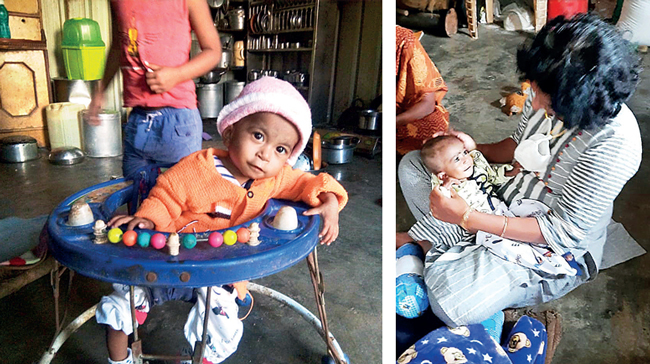 Two anganwadi sevikas are spending each day at baby Manisha’s home, taking care of all her feeding and other needs

The infant was discharged from Sassoon after her health improved on December 29 — and the real challenge began. With Manisha’s parents being mentally challenged and no dedicated caregiver around, anganwadi sevikas went beyond their regular scope of work. Two anganwadi sevikas started spending the entire day at the child’s home to ensure due care is taken. Everything ranging from bathing to feeding the baby is taken care of by them. They also ensure that the necessary amount of milk is delivered and pay for it. The father works as a watchman and has a meagre income source. So, Loni Kalbhor supervisor Meera Tekawade purchased clothes, mattresses and blankets for the girl, besides rations for the family. She elaborated, “We started taking care of Manisha on January 1, 2021. We are providing all medicines and proper nutritional care. I personally visit for two hours daily. We have literally taken charge of one of the rooms and we are doing everything we can. The results are visible. The baby’s weight has increased by 600 grams in 19 days and she has become active. She had no energy earlier, but now tries to hold on to toys. Ensuring that the baby recovers has become our aim now.”

WCD head Dattatray Munde stated that the ZP has now decided to take responsibility of the baby. ZP chief executive officer (CEO) Ayush Prasad said, “When the malnourished child was referred to the paediatric intensive care unit (ICU) at Sassoon, she got some treatment and her weight increased. When she was being discharged, doctors realised that her parents are mentally challenged. We were informed and I asked child welfare officers to look into it. In such cases, if the guardian permits, the child can be put up for adoption. But there are also legal issues involved. So we have for now decided to take up the responsibility by deploying anganwadi sevikas to the home. But, this cannot continue after anganwadis open, so we are trying to explore various options. We are also trying to prepare a scheme for such children to support them in the long term. Providing public support to such children is necessary.”