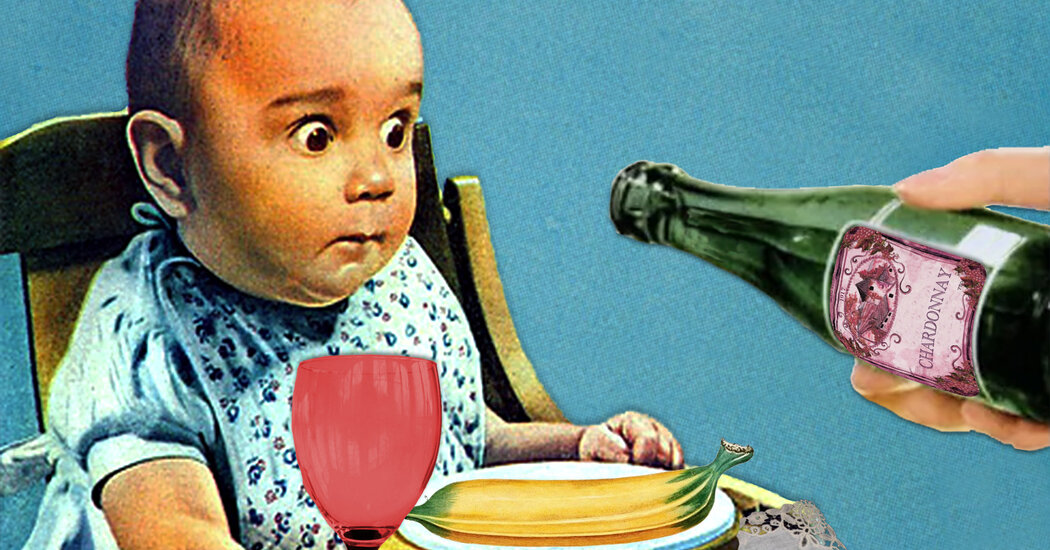 As a diversion from all this mess, I decided to go spelunking through the archives of The New York Times to see what kinds of bonkers parenting advice we were doling out a century ago.

What I found surprised me. While some of the thinking was hilariously misguided (and involved drunk children, more on that shortly), I discovered that lots of the advice sounded somewhat sensible to modern ears, and that we’ve been wrestling with the same issues for decades longer than I had expected.

Let’s start with the terrible guidance — much of which was faintly or overtly sexist and racist, and often focused on bizarre ideas about feeding and medicine. In 1902, The Times ran a positive review of a book called “How Can I Cure My Indigestion?” by one Dr. A.K. Bond, who is very anti-banana:

The best of mothers may be foolish and affection cannot take the place of common sense. “A first-class mother sound in health, of well-developed physique, fond of babies, and restful to her nerves, is the best safeguard against indigestion in an infant.” You may not feed a baby on bananas, and Dr. Bond writes that he has come across such inhumanity (and stupidity).

The goofiest medical advice was offered in 1919, by Dr. Lambert Ott, who was speaking at a convention of the American Medical Association. “I have used red wine as a tonic for weak children with amazing results. However, I instructed the parents not to let the children know that I was giving them wine, but call it red tonic,” Dr. Ott said. The article does not describe what these “amazing” results entailed, although considering Dr. Ott also advocated for the use of whiskey in the sick room, we can only imagine it led to some extremely loopy toddlers.

In the period after World War I, parenting advice began to take shape in a way that seems thoroughly contemporary. A 1926 headline announced: “Woman Reconciles Career and Marriage,” and described the advice of Mrs. Frank Gilbreth, of Montclair, N.J., whose name will be familiar to any readers of “Cheaper By the Dozen,” which was written by two of her 12 children.

“Job analysis and proper husbands,” she declared, were essentials for this reconciliation. By proper husbands she meant the kind who were willing to go “fifty-fifty” to make a wife’s career possible; job analysis she interpreted as a kind of industrial engineering applied to dishwashing and children’s bath and feeding.

Also in the ’20s, there were parents dedicated to puncturing the myths of the perfect mother and child, just like today. In 1926, The Times featured a new magazine called “Children,” which was intended for parents, and its purpose was “to bring scientific findings about children to the harassed elders on the firing line.”

So much sentimental slush has been talked and written about the “defenseless young” that an involuntary fear steals over the reader who picks up a magazine dedicated to them. He need dread no sugary uplift in the tone of the newcomer. It starts off with frank and sprightly disregard of the convention which makes all babies little angels. An article by Mrs. Clara Savage Littledale is typical. She pictures the young mother who is surprised, and not altogether pleased, at the adjustments made necessary by the first child. With the candor of her generation, she says she doesn’t like it nor understand it. The editor admits this is contrary to legend.

In the ’30s and ’40s, The Times had a parenting writer named Catherine Mackenzie, whose columns dealt with issues we’re still mulling, like how much kids should be learning in preschool, whether new kinds of media are harmful to children, and what to do when 13-year-old girls want to wear lipstick and go on dates. (My favorite nugget in her columns, though, comes from former New York City Mayor Fiorello La Guardia, who had some summer safety advice for children in 1939: “Don’t play with knives, fireworks or guns.” Solid guidance for people of all ages, honestly.)

But the most revealing article I read was from 1952. It was a summary of the work of Clark E. Vincent, a graduate teaching assistant in sociology at the University of California, who had surveyed thousands of articles from the previous 60 years of infant care and child-rearing advice.

Vincent noted that the breast vs. bottle “controversy” has been around since Hippocrates, and that much of parenting advice is trend-driven. “In 1890 women’s magazines recommended ‘loose scheduling’; in 1920 they were all for the tight schedule, ‘cry it out’ routine, and in the last year analyzed, 1948, all were for ‘self regulation’ by the baby,” the article noted.

According to Vincent, parenting advice has “often reflected changing patterns of thought in middle-class society, and changing theories of education and personality transformation.” His ultimate takeaway? Less dogmatism and more flexibility, “so long as the baby’s needs are satisfied.” Maybe if we keep giving this advice for the next 70 years — that there’s no one way to parent, that kids can thrive in many different situations — it will finally stick.